Founded in 1856 by George B. Erath, Erath County is located eighty Miles Southwest of Dallas.  The county is home to a multitude of ranchers and farmers, becoming one of the leading producers of milk and providing many of the state's cattle, dairy, hay, peanuts, and small grains.  Erath County offers a since of true Texas living, while making you feel at home whether your a local resident, or a visitor passing through. 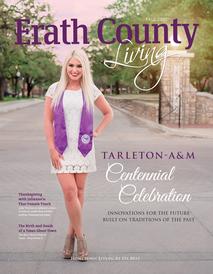 The official Irish capital of Texas, Dublin is known for many things other than their Irish traditions.  Known for its many Indian raids in the area, some believe the name came from the warning cry to "double in."  Others speculate it is named after the capital of Ireland.  Incorporated in March 1889, Dublin became home of legendary golfer, Ben Hogan and the world's oldest Dr. Pepper plant.

Voted one of the best hundred small towns to live in by Prentice Hall, Stephenville is the county seat of Erath County, established by John Stephen in 1854.  With a rich agriculture, livestock, and mining history, the community prospers from its creameries, hatcheries, feed mills, meat packing productions, garment factory, and nurseries.  Once Stephenville College, Tarleton State received its new name from founder, John Tarleton, in 1893.  Today it is the third largest agricultural program among non-land grant universities in the United States.