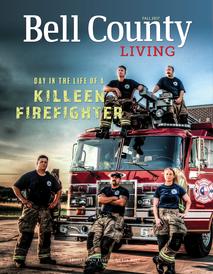 With the Gulf, Colorado, and Santa Fe Railroad in 1881, came growth and a new community in the area, Temple.  Named after the chief engineer, Bernard Moore Temple, it sports such cultural gems as the Azalee Marshall Cultural Arts Center, Temple College Visual Arts Complex, and the Temple Symphony Orchestra.  Not only does the community provide a rich cultural scene, but it is also considered one of the leading medical centers in the Southwest.  A member of the Texas Brazos Trail Region, tourists can experience the rich history of this area any time of year, as they drive the historic route.

What began as an advancement for education and refinement, the establishment of Salado College in 1859 led to the now known treasure of Salado.  With eighteen buildings in the National Register and twenty-three Texas historical markers, it is safe to say this charming community lacks anything but character.  A tourists dream, Salado offers out-of-towners endless local shops, enchanting bed and breakfasts, and sophisticated wineries.

Home to the largest active duty armored military base in the United States, Killeen is considered a melting pot of cultures, uniting diversity through love for one's country.  With the establishment of Camp Hood in 1942, now Fort Hood, as a military training base for World War II, Killeen's scenery would be changed forever.  Once an agricultural asset, it is now home to more than 40,000 United States soldiers.  With an appealing downtown area, arts centers, sports complexes, a weekly farmer's market, and food truck park, Killeen has become an attractive place to raise a family.

Situated sixty miles North of Austin, Harker Heights, known as the Bright Star of Central Texas is an ever-growing community on the skirts of Killeen.  Founded in 1963 by Pinckney Cox and Harley Kern, the suburb population offers an exceptional hospital, abundant parks, and accomplished schools.

Founded in 1850 along the banks of the Nolan Creek, Belton became the county seat of Bell County.  The great outdoors are the prize of this Texas town as they boast two lakes and beautiful parks.  With the addition of Mary Hardin Baylor in 1886, a former women's college, and the Bell County Expo Center, people come from all over the state to live and visit this beautiful community.

Situated in the heart of Texas, Bell County offers a multi-cultural perspective with a small town feel.  The 16th largest county in the state, it is home to the largest active duty military base, numerous lakes, arts centers, historical sights, wineries, shops, and families who enjoy everything this spot has to offer.  We are excited to offer this area the Bell County Living magazine, and look forward to many more wonderful editions.