Known for its annual Peach and Melon Festival, De Leon was named after Spanish Explorer Alfonso De Leon.  The first lots were sold by the Texas Central Railroad in 1881 and with the expansion of the railroad came new growth as farmers and ranchers settled in the area.

Established in 1858 by John Duncan along Indian Creek, Comanche became a supply base for ranchers in the surrounding area.  Besides its serene setting, Comanche's Proctor Reservoir is a favorite among locals and visitors and the Comanche County Historic Museum is a great place to visit to take in all the history that this rural community has to offer.  Comanche offers a great downtown square with an exceptional courthouse.

An area named after the indians who dominated it, Comanche County boasts such events as an annual livestock show in January and its traditional rodeo in July.  A rural community bordering Eastland County, it is known for its production in wheat, corn, and most of all its peanuts.  Comanche County offers great hunting a recreational opportunities for both residents and visitors, and is know for its whitetail deer populations. 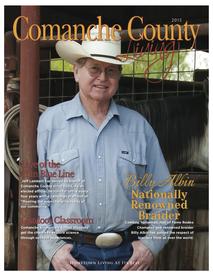